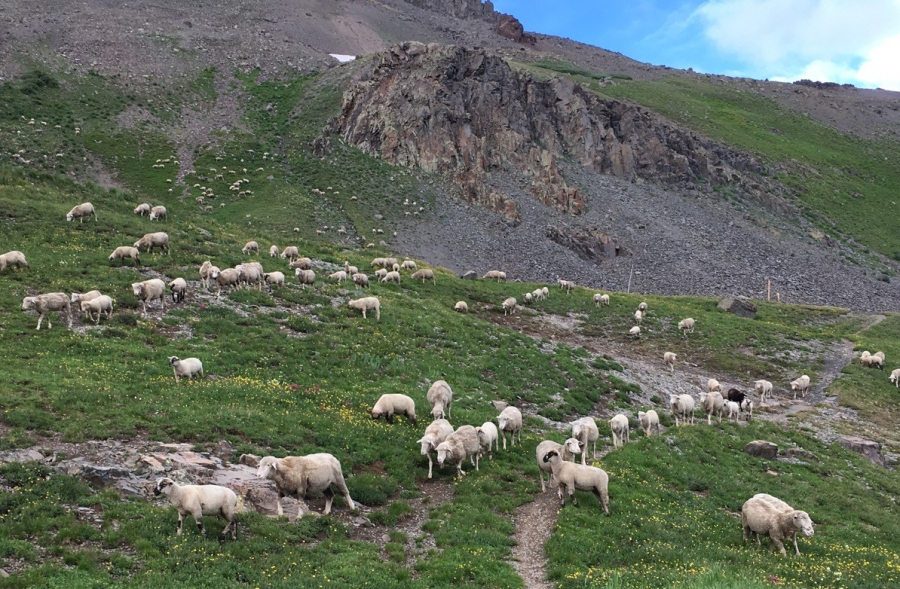 I wander a lot, though not as much as I’d like. And I read a lot, though not as much as I should. These hobbies often collide, and it’s not unusual for me to recognize places I’ve been in the things I read. So when I saw Paige Blankenbuehler’s recent High Country News piece about the intersection of wildlife management and domestic sheep grazing in the Weminuche Wilderness of Colorado, it took me back to an evening in the far northern Weminuche in July of 2017. I didn’t think too much of it at the time, but in retrospect what I saw (and documented) that night tells a big part of the story of land management in the Colorado high country.

Brian (my usual hiking cohort) and I were about halfway through a weeklong trip from Weminuche Pass to Spring Creek Pass along Colorado’s Continental Divide Trail. We’d started the day at Kite Lake, where early-morning storms had kept us off the trail until late morning. The hike to Stony Pass was only eight or nine miles—a mild day compared to the rest of our itinerary—so we arrived mid-afternoon with plenty of time to relax.

We pitched our tents right below Stony Pass Road in a broad meadow filled with both wildflowers and mining-era detritus, including the battered remnants of some century-old cabins. OHV traffic on the Stony Pass road was mercifully light, perhaps due to the threatening clouds that had begun to gather again to the west. In spite of the gathering storm, we were hoping for a pleasant, low-key evening. 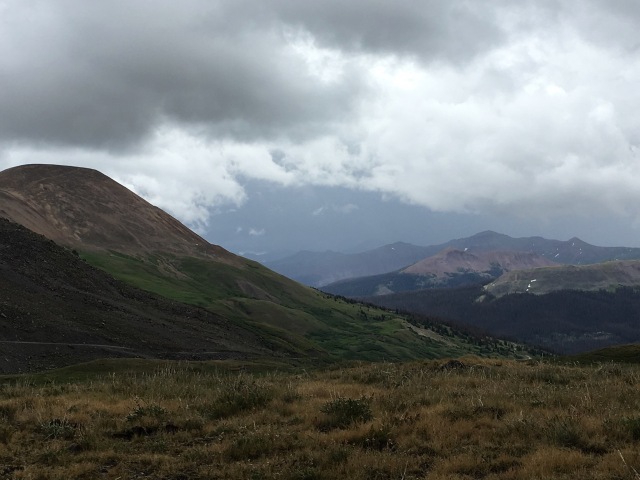 We heard the approaching herd before we saw it. In a matter of moments, our quiet campsite was invaded by several thousand bleating sheep, their bells ringing like a tour bus full of edgy Midwesterners emptying out into grizzly country for the first time. A single dark-skinned sheepherder watched from the ridge above as four sheepdogs worked the herd back and forth the formerly serene meadow. I’d encountered plenty of sheep in the Weminuche backcountry before, but the sheer size of this herd was something new. 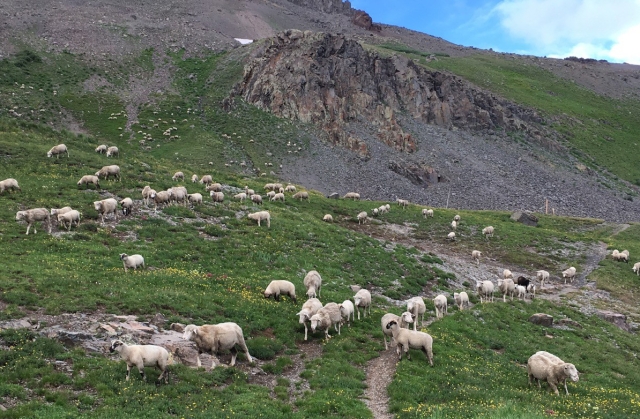 I guess I’d always imagined that a moving herd of sheep would… you know, move. Like they’d have someplace to go and would be intent on getting there. In reality, there was very little forward progress, as successive waves of mutton surged around our tents and our cookstoves for well more than an hour. We’d think the herd was finally moving up the hill and over the ridge, but all of a sudden the sheep in the rear would turn around and surge towards us again. The dogs kept things orderly, but the shepherd made no effort to coax the sheep away from Stony Pass for the night. 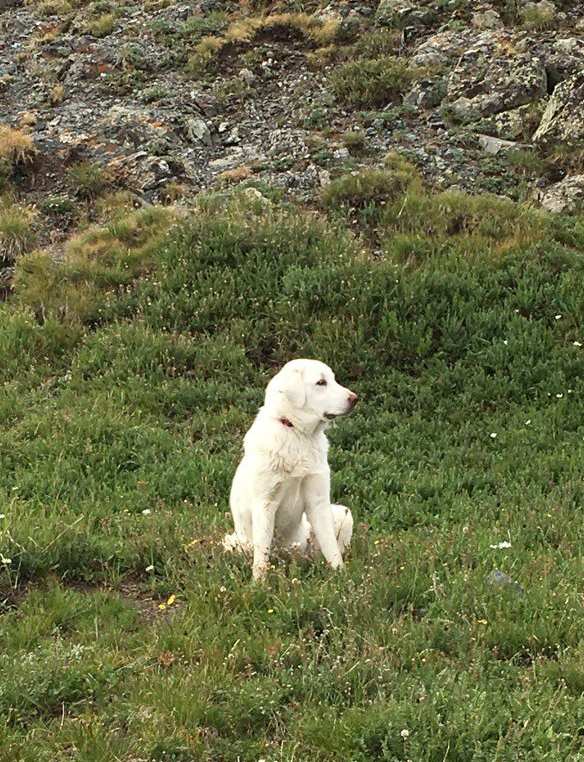 Scanning the horizon for a hopeful break in the throng, I noticed an extended cab Tacoma parked just east of Stony Pass itself. Leaning against the truck was an older gentleman with his arms crossed, calmly watching the scene unfold. I wasn’t sure if he as a sightseer waiting to make his way east to Lake City or west to Silverton, a fellow hiker who identified with our predicament due to past experience, or someone somehow connected to the sheep operation. Whatever his business was, he just stood there watching us flail around in the sea of sheep. Admittedly, it was probably pretty entertaining.

As night began to fall, we were faced with a choice: stay where we had established camp and hope the sheep moved on (or at least didn’t trample our camp in the darkness), or move our tents to the next available spot we could see: a gravel pull-off about a third of a mile down the road. To complicate things further, the dark clouds to the west were becoming more organized and more menacing. Thunder sounded in the distance—it was almost certainly raining in Silverton already, and it was coming our way. We had to decide, and quickly.

It was then that I noticed the bighorn. Among the throng of domesticated stock, one wild bighorn was trying to blend in with the herd. The whole thing was like a time-lapse sequence from a Benny Hill episode. Every time one of the sheep dogs noticed the bighorn, a chase would ensue. The wild sheep would easily outpace the canine and range out of sight, only to reappear once the dogs were preoccupied with other duties. I’d never witnessed a bighorn sheep commingling with a flock of their less wild cousins… but then again, I’d never been in the middle of a several thousand animal-strong herd. It was oddly compelling to watch. Of the photos I snapped with my phone, only one was clear enough to capture the whole scene. 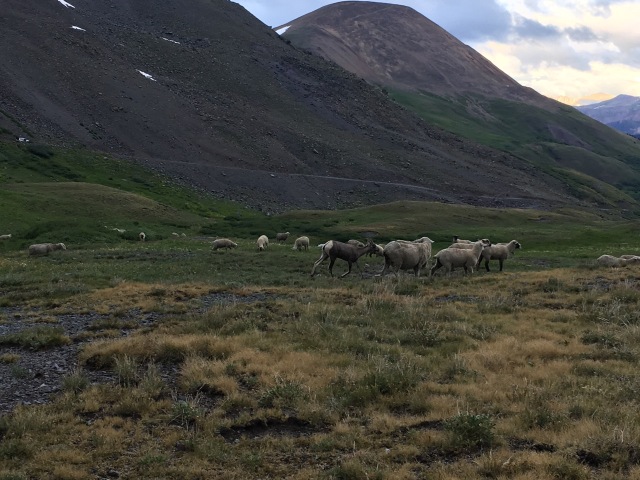 Curiosity quickly gave way to practicality. I decided at last that I had no interest spending the night listening to the vocalizations of the sheep—or the constant sickening splats of sheep shit hitting the ground. At my urging, we very quickly broke down our tents, stuffed our gear in our backpacks and ran towards the possible other camp we’d seen. Rain was starting to fall, and I loathed the thought of re-pitching our tents in the middle of a Colorado summer squall.

Apparently, the shepherd had also decided that enough was enough. He shouted several commands to the dogs, who magically worked the herd and got them moving south up and over a ridge in a matter of minutes. As the bleating and the bells receded, shepherd then quickly made for the road. He reached the older man and his pickup just as the rain began to intensify. Both men jumped in the cab, the headlights gleamed and the engine came to life. They edged down from the top of the pass in the direction of Lake City.

As the truck reached us, it suddenly stopped. The driver jumped out and approached us, waving his Western hat as if to beat off the rain. “Sorry about that,” he said slowly. “I’d have had him bed down the sheep earlier if I’d known you were going to pack up and go.”

“That’s OK,” I replied wearily. I gestured towards the dark man in the passenger seat. “He was working,” I said, seeking some sort of way to bridge an obvious gap. “We’re just out here walking.”

“That’s true,” muttered the older man. He thought about it, then added strangely, “I am the pastor of this flock, after all.”

We waved a final curt goodbye and quickly made it to the gravel pullout just as the skies opened up. This second campsite was comparatively poor. Tent stakes did not willingly find purchase in the road base, and the slope of the pullout dictated that we pitch our ultralight shelters with their openings towards the incoming storm—a less than ideal situation. Lightning blazed trails through the dusk all around us as the rain soaked us, our half-pitched tents and all of our gear. Within about ten minutes we’d finished erecting our tents and crawled inside, but the damage was done. I’d spend much of the rest of the night futilely trying to contain the lake in the middle of my tent.

Wet and cold from the night’s trials, I found sleep elusive. I wondered about the old man, the shepherd and their Toyota. They could have moved the sheep at any time, making the driver’s quick apology ring less than true. I couldn’t shake the feeling that the way we’d been disrespected was a microcosm of the issues associated with high country land management. And I thought about that single bighorn who so badly wanted to join the flock that we so badly wanted to escape. What would come of her? Would they begrudgingly accept her, or would the dogs chase her off day after day? Did the sheep bosses even know she’d temporarily joined their herd?

Morning came slow and cold, and the usual coffee and granola had no power to improve our mood. We were on the trail by 6:30 with fifteen miles to cover. As we navigated across the headwaters of the Rio Grande between Canby Mountain to the west and Sheep Mountain to the east, our gear and our persons were soon dry. But our spirits remained dampened for the rest of the day.

Thanks For Wandering Over!

Where’s Ben Wanderin’ is a chronicle of my travels across the American West. Each entry features an embedded map to bring you along for the journey.

It’s admittedly pretty sparse here at the moment, but I promise things are going to get rolling fast!

Photos, stories, and more from the wilds of the PNW and beyond!

Because life's too short to be an indoor cat.

Hikes and Travels in Colorado and Beyond

Travels, photos and high-resolution satellite imagery from across North America.

A daily selection of the best content published on WordPress, collected for you by humans who love to read.

The Art and Craft of Blogging

The latest news on WordPress.com and the WordPress community.