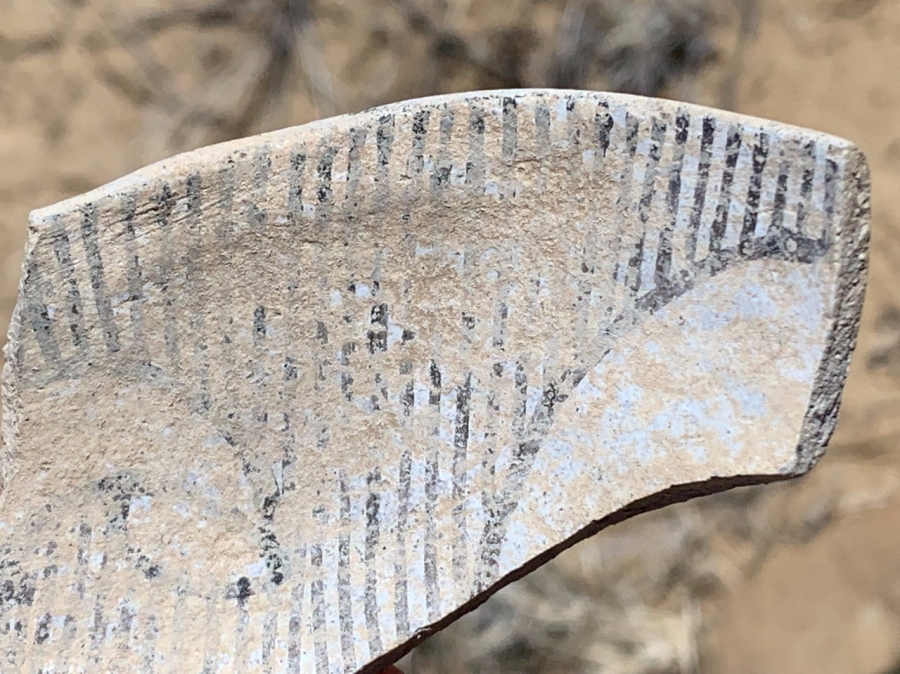 We’d been meaning to get back to Chaco Culture Natural Historic Park for a long, long time. Julie and I had first visited in the late 1990s, when Julie’s sister Meredith (who lived in Arizona at the time) met us at Chaco to camp and explore. I’ve seen a lot more of Four Corners country since then, of course, and I was excited to see how the splendid architecture and natural beauty of Chaco would compare to my favorite places in the slickrock world.

I was suprised, however, that the park “attraction” with which I was most smitten was not the massive ruin of Pueblo Bonito, nor the imposing figure of Fajada Butte standing alone in the sagebrush, nor any of the various examples of Ancestral Puebloan rock art that can be found in various locations around the park. No, I was most interested in Richard Wetherill’s grave.

One of four brothers in the foremost family of early Four Corners archaeology, Richard Wetherill remains a controversial figure. Wetherill’s various and wide-ranging discoveries—including Cliff Palace at Mesa Verde, Keet Seel, Betatakin and many others—is surely the most impressive list of any of the first wave of desert explorers. Yet he is typically derided as a “pot hunter” whose lack of archaeological training and willingness to profit from the sale of the artifacts he discovered outweigh his findings.

What makes Richard Wetherill’s list of accomplishments more impressive is that they were all achieved in a relatively short period of time—just barely more than 50 years—in a life cut short by a bullet. Wetherill was shot dead by a local Navajo man at his trading post at Pueblo Bonito in June of 1910—just thirteen seasons after his beloved Chaco Canyon region was proclaimed as a national monument by President Theodore Roosevelt.

Despite the prominent signage provided by the Park Service, Wetherill’s grave itself is off limits to casual viewers. A ragged fence of sagging timbers, rusted barbed wire and mismatched sections of gate prevents curious onlookers from coming within thirty feet of Wetherill’s two headstones—one with rustic hand-carved lettering and adorned with stacked stones in roughly Chacoan style, the other (shared with his wife, Marietta) strangely generic.

Curiously, “Wetherill’s Grave” contains more than just the remnants of Richard and Marietta, who outlived her murdered spouse by forty-some years. Also interred there are, according to the park’s ubiquitous, sun-bleached NPS signage, are “Grace Etcitty, C. A. and Ramona Griffin, several local Navajo people (unidentified, as was the custom), and others.” One can see vague suggestions of gravesites in the circled stones and rounded mounds of dirt within the haggard fence, though the exact locations and identities of the “local Navajo people” and “others” remains elusive.

As a longtime enthusiast of the natural wonders of the Colorado Plateau, I’ve frequently come across references to the Wetherill family in the field and in various books on the archaeology of the region. There are Wetherill Mesas in both Mesa Verde National Park and just south of the Arizona-Utah state line in Monument Valley. So it shouldn’t have surprised me that Ricard’s final resting place held such prominence in modern-day Chaco Park.

And what prominence! Julie, Colin and myself first visited the Wetherill Grave as a twenty-minute deviation from exploring the connecting chambers and great kivas of Pubelo Bonito. The next day, we encountered the NPS placard pictured above while registering for our dayhike to Pueblo Alto, a partially excavated site with potsherds scattered about and a commanding view of the surrounding mesas and valleys. And we had a prime view of the gravesite itself from the Pueblo Alto loop trail. It seemed to me that one could not escape Wetherill (and the site of his burial) anyone one went in Chaco—perhaps fittingly, given the importance and infamy of Richard Wetherill to that place a century ago.

From the Pueblo Bonito overlook on the shade-providing rim to the west, one can easily imagine Richard and Marietta’s Chaco trading post, which they’d literally carved into the remnants of the pueblo in pre-Park Service days. Eyes closed in the springtime desert sun, I could see them going about the daily business of running the most remote outpost in the desert southwest. Bartering good-naturedly with Navajos whom they considered friends. Keeping a careful inventory of sugar, coffee, horseshoes, jerky and more. Watering their stock in the draw below. Subsisting and surviving, if not exactly thriving.

The overlook above Pueblo Bonito is extremely popular with visitors to Chaco, and for good reasons. But I suspect that many viewers of the ruins below cannot help but move their gaze briefly to the lonely little fenced graveyard situated just to the south.

Thanks For Wandering Over!

Where’s Ben Wanderin’ is a chronicle of my travels across the American West. Each entry features an embedded map to bring you along for the journey.

It’s admittedly pretty sparse here at the moment, but I promise things are going to get rolling fast!

Because life's too short to be an indoor cat.

Hikes and Travels in Colorado and Beyond

Travels, photos and high-resolution satellite imagery from across North America.

A daily selection of the best content published on WordPress, collected for you by humans who love to read.

The Art and Craft of Blogging

The latest news on WordPress.com and the WordPress community.